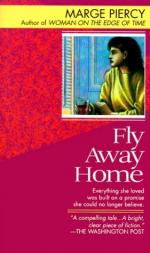 Books Like Fly Away Home by Marge Piercy | Suggested Reading

Marge Piercy
This Study Guide consists of approximately 6 pages of chapter summaries, quotes, character analysis, themes, and more - everything you need to sharpen your knowledge of Fly Away Home.

Most novels Marge Piercy has written feature female protagonists struggling to make places for themselves on their own terms in a wider world that privileges males, and privileges females when they are linked with males, most notably by marriage. Fly Away Home, thus, has much in common with The Longings of Women (1994), and with many of Piercy's poems. Moreover, it explores terrain travelled frequently by female fiction authors who, like Piercy, were first published in the late 1960s, and shortly thereafter. These include: Alice Walker, Toni Morrison, Margaret Atwood, Erica Jong, Alice Munro, Doris Lessing, and, later, Ann Beattie.

More summaries and resources for teaching or studying Fly Away Home.

Fly Away Home from Gale. ©2005-2006 Thomson Gale, a part of the Thomson Corporation. All rights reserved.