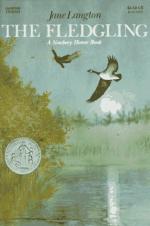 Jane Langton
This Study Guide consists of approximately 14 pages of chapter summaries, quotes, character analysis, themes, and more - everything you need to sharpen your knowledge of The Fledgling.

1. Madeline Prawn records her "inspirational thoughts" in a notebook, and Thoreau regularly wrote in his journals.

2. Uncle Freddy and Aunt Alex teach "about the wise men who had lived in Concord a hundred years ago, Henry Thoreau, Ralph Waldo Emerson, and all their poet-friends and fellow thinkers" in The Concord College of Transcendental Knowledge. Why are these people called transcendentalists? What ideas did they have in common? Which of these ideas are expressed in the novel?

3. "No longer was the old goose flying with his mate, guiding another young family of excited half-grown fledglings from the blue northern lake where the goslings had been...

More summaries and resources for teaching or studying The Fledgling.

The Fledgling from Gale. ©2005-2006 Thomson Gale, a part of the Thomson Corporation. All rights reserved.