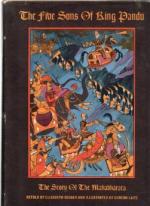 Elizabeth Seeger
This Study Guide consists of approximately 16 pages of chapter summaries, quotes, character analysis, themes, and more - everything you need to sharpen your knowledge of The Five Sons of King Pandu.

Preview of The Five Sons of King Pandu Summary:

The interesting story of the five Pandava brothers and their common wife, Draupadi, provides a view of the sophisticated civilization of the heroic period of Indian history. In its stories, legends, myths, and instructional passages, The Mahabharata treats all the aspects of ancient Indian culture—religion, moral values, politics, economics, art, science, and mathematics.

The struggle of the Pandavas to overcome the external obstacles posed by their jealous cousins, the Kuravas, is part of the living culture of India. Every Hindu, whether rich or poor, educated or illiterate, is influenced by the story.

Storytellers narrate its episodes in villages, priests recount them in temples, and. mothers and grandmothers tell them in the homes. These stories have provided an ethical base in India for over three thousand years. The wisdom of The Mahabharata is also shared by the countries that fall within India's cultural sphere. The noble deeds...

More summaries and resources for teaching or studying The Five Sons of King Pandu.

The Five Sons of King Pandu from Gale. ©2005-2006 Thomson Gale, a part of the Thomson Corporation. All rights reserved.