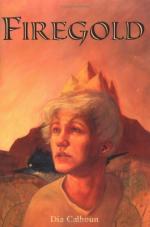 1. What are some reasons Jonathon thinks he's going crazy after he finds the red stone?

2. Why does Timothy harass Jonathon so much? Does Rosamund have anything to do with it? Why does it get worse after Brian calls in the loan on the Dakkens' land?

3. Why does Jonathon's mother not want him to go into the Red Mountains until he is fourteen? What does she know about them that his father does not?

4. Why do you think Brian brought Rhohar from the mountains for Jonathon?

5. Why does Jonathon's father give up on his plan to get another waiver from the High Council? What do you think his backup plan is?

6. His grandmother tells Jonathon that any woman married to Brian Brae would need to get away from him sometimes. Why? Do you think Jonathon was feeling the same way about his father?