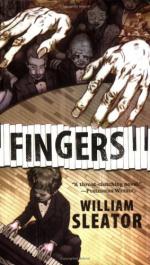 William Sleator
This Study Guide consists of approximately 9 pages of chapter summaries, quotes, character analysis, themes, and more - everything you need to sharpen your knowledge of Fingers.

The story begins in a tiny rundown hotel room in Venice, Italy. The majority of the action takes place in either the family's hotel rooms or the various concert halls that Humphrey plays in.

The majority of the scenes depicted are seedy hotels, restaurants, rehearsal halls, and a train. The story takes place in post World War II Europe with flashbacks to the 1800s as Sam reads about the life of Laszlo Magyar. The climax of the book takes place in an old spooky warehouse along the riverbanks in Geneva.

More summaries and resources for teaching or studying Fingers.

Fingers from Gale. ©2005-2006 Thomson Gale, a part of the Thomson Corporation. All rights reserved.