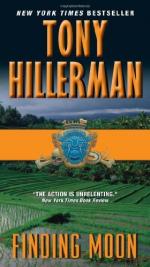 Tony Hillerman
This Study Guide consists of approximately 11 pages of chapter summaries, quotes, character analysis, themes, and more - everything you need to sharpen your knowledge of Finding Moon.

While he sets Finding Moon in a location far from the American Southwest, Hillerman draws on some themes common to his other novels. One of the most important of these is the need for understanding among people of different cultures.

The novel traces Moon's attempt to locate in Cambodia the child of Ricky, his deceased younger brother, and a Cambodian woman, now also dead. Moon is anxious to find the infant girl for many reasons—not the least of these being his mother's intense desire for a grandchild—but he is particularly concerned that the child will suffer because of her mixed parentage. He is told that in Southeast Asia, such children, especially those born of unions between Americans and Asians, were despised. As one character puts it, "In Asia people are very proud.

More summaries and resources for teaching or studying Finding Moon.

Finding Moon from Gale. ©2005-2006 Thomson Gale, a part of the Thomson Corporation. All rights reserved.