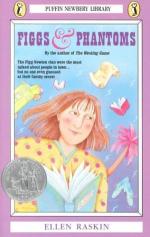 Flanagan, Dennis. "The Raskin Conglomerate." Horn Book 55 (August 1979): 392-395. A witty essay on Ellen Raskin's versatility and life by her husband, long-time editor of Scientific American, on the occasion of the Newbery Award for The Westing Game.

Hieatt, Constance B. "The Mystery of Figgs & Phantoms." Children's Literature 13 (1985): 128-138. The first thorough explication of the novel with valuable insights about Raskin's illustrations, use of typefaces, and literary allusions.

"Characters and Other Clues."

Horn Book 54 (December 1978): 620625. Raskin's novels and characters are often indirectly based on her childhood and family. Here she explains the sources of characters in Figgs & Phantoms.

Wisconsin Educational Television Network. The Creative Process of Ellen Raskin. This is a thirty-minute video tha t can be ordered from the Children's Book Center at the...