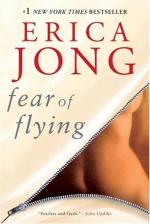 Writing Techniques in Fear of Flying

Erica Jong
This Study Guide consists of approximately 5 pages of chapter summaries, quotes, character analysis, themes, and more - everything you need to sharpen your knowledge of Fear of Flying.

Fear of Flying is structured more tightly than is at first apparent. It begins with Isadora's trip to Vienna with her husband for a psychoanalytic congress. Because Vienna is the city of Freud and also, in welcoming large numbers of Jewish psychoanalysts, is trying to pretend that the Nazi past never happened, it provides an appropriate focus for Isadora's examination of personal neuroses, family history, Jewish identity, and Freud's question: "What do women want?"

She explores these issues through a series of flashbacks that move in thematic rather than chronological order.

Because the flashback scenes are developed in full and often parodic detail the novel is sometimes described as picaresque: a satiric, realistic series of adventures, linked only by a central adventurer. Nevertheless, the quest motif controls Isadora's path, and the novel is further enriched by well-developed allusion, imagery, and symbolism.

More summaries and resources for teaching or studying Fear of Flying.

Fear of Flying from Gale. ©2005-2006 Thomson Gale, a part of the Thomson Corporation. All rights reserved.