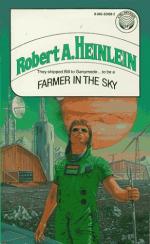 Farmer in the Sky Topics for Discussion

Robert A. Heinlein
This Study Guide consists of approximately 10 pages of chapter summaries, quotes, character analysis, themes, and more - everything you need to sharpen your knowledge of Farmer in the Sky.

1. Would you be willing to abandon everything that is familiar to settle a new world?

2. Bill's Scout leader, Mr. Kinski, says that "anybody who can't keep order without using his fists can't be a patrol leader." Does Bill follow this advice? Is it good advice?

3. Why does the captain of the space transport push the immigrants to form their own government?

4. When the captain of the transport punishes the rule-breakers, do these punishments fit the crimes? Why or why not?

5. Why does Bill work so hard to keep and preserve his Scout uniform?

6. Why does Noisy Edwards hit Bill even though Bill has saved his life? Does Bill do the right thing by not fighting back? What does George mean when he says that "sometimes therejust isn't any cure for a situation"?

7. Bill learns that some people are travelling to Ganymede because of political...

More summaries and resources for teaching or studying Farmer in the Sky.

Farmer in the Sky from Gale. ©2005-2006 Thomson Gale, a part of the Thomson Corporation. All rights reserved.