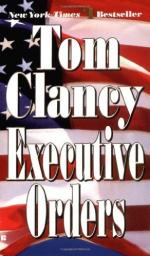 Tom Clancy
This Study Guide consists of approximately 13 pages of chapter summaries, quotes, character analysis, themes, and more - everything you need to sharpen your knowledge of Executive Orders.

Executive Orders portrays a world in which political relationships among nations are rapidly changing. One way to begin discussing the novel would be to ask which of the changes in relationships are credible and which are improbable.

For instance, would India really be likely to want to drive the United States out of the Indian Ocean and to want to annex Australia? The invasion of Sri Lanka is taken from actual events: Does this mean Clancy's speculations about India's designs have validity?

For those who are interested in figuring out what makes a work of fiction tick, a discussion could begin with the question of the novel's genre. Is it a thriller the way The Huntfor Red October is a thriller, or has Clancy crossed the line between thriller and moved into science fiction?

1. Is Executive Orders a cautionary tale?

Is its author trying to warn...

More summaries and resources for teaching or studying Executive Orders.

Executive Orders from Gale. ©2005-2006 Thomson Gale, a part of the Thomson Corporation. All rights reserved.