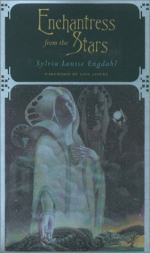 Enchantress from the Stars Setting

Sylvia Engdahl
This Study Guide consists of approximately 9 pages of chapter summaries, quotes, character analysis, themes, and more - everything you need to sharpen your knowledge of Enchantress from the Stars.

The novel takes place on Andrecia, the "third planet of a medium-sized yellow star." Its further location in time and space is not specified, but it is clearly one planet of a universe that includes many inhabited planets in different star systems. The action of the story unfolds within a relatively small area on Andrecia—a forest bordered by a river, some surrounding land which holds a village, and the new colonists' settlement on one edge of the forest.

The planet has earth-type vegetation.

Unlike the settings of some science fiction novels, neither the cultural nor the physical background are very strange.

Nor are they evoked in extraordinary depth or detail. Andrecia could be the medieval earth of song and story, although the presence of intruders from two far-off planetary systems makes this seem unlikely. The opening and closing sections of the book show Elana, the protagonist...

More summaries and resources for teaching or studying Enchantress from the Stars.

Enchantress from the Stars from Gale. ©2005-2006 Thomson Gale, a part of the Thomson Corporation. All rights reserved.