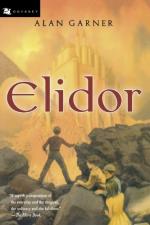 Alan Garner
This Study Guide consists of approximately 16 pages of chapter summaries, quotes, character analysis, themes, and more - everything you need to sharpen your knowledge of Elidor.

When Elidor was first published, Library Journal suggested it for grades five through seven, but it is not always easy to say what age group Garner's novels are written for. Some critics suggest that he writes for adults, but Garner himself has stated that his early books were written with young people of ages ten to eighteen in mind. Gamer has stated that he attempts to create works with several layers of meaning so that they can be read and enjoyed by young people of various ages.

When Elidor was published, some thought it might be "too terrifying" for young people. Although the novel has some frightening scenes, it does not seem terrifying by today's standards.

Readers may need to discuss the implications of the downbeat ending, which some find depressing.

More summaries and resources for teaching or studying Elidor.

Elidor from Gale. ©2005-2006 Thomson Gale, a part of the Thomson Corporation. All rights reserved.