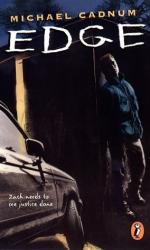 Michael Cadnum
This Study Guide consists of approximately 22 pages of chapter summaries, quotes, character analysis, themes, and more - everything you need to sharpen your knowledge of Edge.

Zachary is adrift in the world. He has cut himself off from most of his past, dropped out of high school, broken up with girlfriend, lost touch with his best friend who moved away, and seems content in his discontent.

He is also angry at the world, an anger that often explodes in violence. When a random act of violence enters his life—his father is shot during a car-jacking—his life begins to spin out of control. When it appears that the person arrested for shooting and paralyzing his father will go free due to a lack of evidence, Zachary becomes obsessed with seeking vengeance. Retrieving a gun he acquired years ago, Zachary is determined to see justice done.

Cadnum says that like his earlier novels Calling Home and Breaking the Fall, Edge is based on a true event. In those books, however, the idea...

More summaries and resources for teaching or studying Edge.

Edge from Gale. ©2005-2006 Thomson Gale, a part of the Thomson Corporation. All rights reserved.