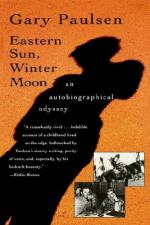 Gary Paulsen
This Study Guide consists of approximately 13 pages of chapter summaries, quotes, character analysis, themes, and more - everything you need to sharpen your knowledge of Eastern Sun, Winter Moon.

Eastern Sun, Winter Moon describes the origin of Paulsen's disappointment with adulthood and sense that his childhood slipped away too quickly.

Although he confesses in the Forward that he resisted remembering the unpleasant events of his first seven years, writing about them was the only way to deal with the "wounds, scars, things that damage me." Today, when most adults remember World War II nostalgically as a challenging time that brought out the best, spiritually and morally, in American men and women, Paulsen recalls behaviors and attitudes usually hidden from children. He relates them matter-of-factly because, he argues, children deserve the truth.

Paulsen's story is a story of contrasts: between youthful expectations and adult realities, between a modern American city and a war-torn Asian land, between a desire for a stable home and the unexpected dislocation caused by war, between the bravery of soldiers and their unthinking contempt...