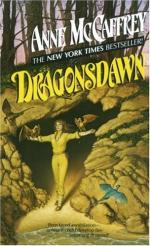 Anne McCaffrey
This Study Guide consists of approximately 7 pages of chapter summaries, quotes, character analysis, themes, and more - everything you need to sharpen your knowledge of Dragonsdawn.

In accordance with McCaffrey's environmental theme, the principal "character" is Pern itself. The novel opens with the sending of mobile probes down to the planet's surface to study its complex ecosystems and to plan for the impact of Earth biology on Pern.

McCaffrey pairs the main human characters in the novel, either linking them as companions or using them as foils in illustrating aspects of Pern society. The first dyad is Admiral Paul Benden and Governor Emily Boll.

Strong leaders in the FSP and the only characters that retain their former titles, they are united in their desire to forget their past sacrifices to a dying system, in their mutual respect for each other's strength, and in their hope to see the Pern colony prosper. While Benden and Boll are not official leaders in Landing (the first settlement), in emergencies the colonists look to them for guidance.

More summaries and resources for teaching or studying Dragonsdawn.

Dragonsdawn from Gale. ©2005-2006 Thomson Gale, a part of the Thomson Corporation. All rights reserved.