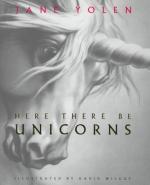 Jane Yolen
This Study Guide consists of approximately 14 pages of chapter summaries, quotes, character analysis, themes, and more - everything you need to sharpen your knowledge of De Natura Unicorni.

Although Yolen regards Brother Bartholomaeus' disquisition on unicorns as "boring," she takes his opening phrase and uses it as her story's opening phrase. Her version of Brother Bartholomaeus turns out to be an extraordinary blowhard who never stops talking, lecturing endlessly about his research into unicorns and their behavior; even so, he establishes a few important points about unicorns, particularly that they are more than one species of animal with each type having unique characteristics.

For the story as a whole, the notion that "An unicorn is a right cruel beast" (as Brother Bartholomaeus originally phrased it) is foreshadowing that creates suspense.

The exact form of the cruelty of a unicorn is debatable throughout. Gregory seems to catch on to the...

De Natura Unicorni from Gale. ©2005-2006 Thomson Gale, a part of the Thomson Corporation. All rights reserved.