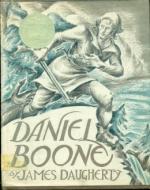 James Daugherty
This Study Guide consists of approximately 10 pages of chapter summaries, quotes, character analysis, themes, and more - everything you need to sharpen your knowledge of Daniel Boone.

Daugherty's favorite subjects were distinctively American. He wrote about the settlement of America in The Landing of the Pilgrims and about heroic individuals in Abraham Lincoln, Of Courage Undaunted: Across the Continent with Lewis and Clark, Trappers and Traders of the Far West, and Marcus and Narcissa Whitman: Pioneers of Oregon. Whether in poems such as The Wild, Wild West or in stories such as Their Weight in Wildcats: Tales of the Frontier, his work most frequently dealt with the American West. As an editor, too, he chose selections from American writers whose perceptions of individualism and patriotism had inspired him: Waft Whitman's America, Henry David Thoreau: A Man of Our Time, and The Sound of Trumpets: Selections from Ralph Waldo Emerson.