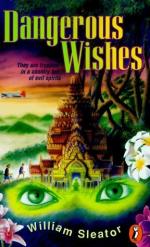 William Sleator
This Study Guide consists of approximately 14 pages of chapter summaries, quotes, character analysis, themes, and more - everything you need to sharpen your knowledge of Dangerous Wishes.

"She say bad spirit in your house," said the boy in the skeleton T-shirt.

Dom shivered in spite of himself. At home, a remark about spirits wouldn't have bothered him. But here in Thailand, in this strange, shadowy house, what the boy said made him very uneasy.

In this passage the novel's unifying theme of the stranger is announced.

Dom is an American who has already learned a little about Thailand and who can even speak some simple Thai phrases, but he is largely ignorant of the subtleties of Thai life, thinking that "Anything seemed possible here."

When Dom finds himself in a strange house crowded with customs which include profound spiritual beliefs alien to him, his character is severly tried. His first impulse is to retreat into his computer, and this tells us a little about him—that he tends to try...

More summaries and resources for teaching or studying Dangerous Wishes.

Dangerous Wishes from Gale. ©2005-2006 Thomson Gale, a part of the Thomson Corporation. All rights reserved.