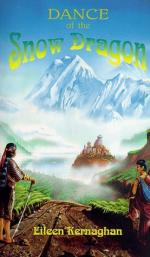 Eileen Kernaghan
This Study Guide consists of approximately 15 pages of chapter summaries, quotes, character analysis, themes, and more - everything you need to sharpen your knowledge of Dance of the Snow Dragon.

The cast of characters includes Buddhist monks, ancient warriors, and kings in their mighty palaces. A young apprentice monk seems very small in a world including all these people, plus the grand mountains and weather in many forms.

Even more clearly depicted than Sangay, the young yak-herder who becomes a monk, is Jatsang, the sorceress who decides to accompany him on his journey. That is partly because for the first half of Sangay's story, he is much like the other young people in the village and the monastery. However, Jatsang has a motley assortment of talents and character traits that make her more unique than anyone else in the story.

The monks and Abbot may have taught Sangay for seven years, but Jatsang is able to teach him much in a journey of some weeks.

In the early part of the novel, Sangay works...

More summaries and resources for teaching or studying Dance of the Snow Dragon.

Dance of the Snow Dragon from Gale. ©2005-2006 Thomson Gale, a part of the Thomson Corporation. All rights reserved.