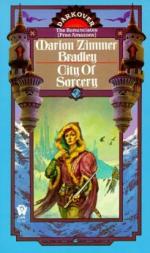 Writing Techniques in City of Sorcery

Marion Zimmer Bradley
This Study Guide consists of approximately 7 pages of chapter summaries, quotes, character analysis, themes, and more - everything you need to sharpen your knowledge of City of Sorcery.

The setting for the search — a land of eternal snow, forbidding mountains, and wailing banshees — allows new metaphysical insights into the Overworld, the region of communicative "psi" power. In the Overworld the individual consciousness can interact not only with others, but also with a united past, present, and future. For example, in one of Magda's psi dreams, she, her daughter, and her daughter's infant co-exist in a loran-inspired World Soul. This state expresses not only the power of motherhood, but the ability of the child to mother itself, and likewise to nurture its own mother. In the three-day blizzard during which the team arrives at an earthly gateway to the city, devotees rescue them from freezing and communicate the moralethical knowledge required in the final ascent.

More summaries and resources for teaching or studying City of Sorcery.

City of Sorcery from Gale. ©2005-2006 Thomson Gale, a part of the Thomson Corporation. All rights reserved.