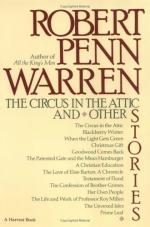 Circus in the Attic Characters

Robert Penn Warren
This Study Guide consists of approximately 13 pages of chapter summaries, quotes, character analysis, themes, and more - everything you need to sharpen your knowledge of Circus in the Attic.

The major characters are Bolton and Mrs. Lovehart, who are revealed mainly through their actions. Even so, some of Bolton's inner life is revealed in the narrative, especially in his devotion to the toy circus. Mrs. Lovehart's egotism is displayed through her various subterfuges and more directly in the moment of her death, when we are given an insight into her emotions, and we see her castigating her heart for "betraying" her, as she has accused her son of doing.

Of the secondary characters, Bolton's ineffectual father is rather vaguely characterized. A Confederate veteran, he is essentially a stoic gentleman, but his reticence leads Bolton to wish, futilely, at Simon Lovehart's death, that he had known his father better.

Vividly although briefly characterized are Seth Sykes, the Union sympathizer who becomes a Confederate martyr; Dr.

Jordan, the kindly small town doctor who has doubts about Mrs. Lovehart's supposedly...

More summaries and resources for teaching or studying Circus in the Attic.

Circus in the Attic from Gale. ©2005-2006 Thomson Gale, a part of the Thomson Corporation. All rights reserved.