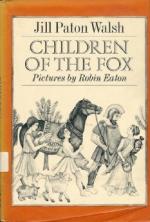 Children of the Fox Social Sensitivity

Jill Paton Walsh
This Study Guide consists of approximately 9 pages of chapter summaries, quotes, character analysis, themes, and more - everything you need to sharpen your knowledge of Children of the Fox.

War is a recurrent subject in Paton Walsh's writing, sometimes forming the backdrop for a story of emotional maturation, as in Fireweed, and sometimes constituting the central theme of the novel. War functions as both background and theme in Children of the Fox.

The stories depict the waste and terrible destruction that war wreaks as well as the heroism and loyalty that war inspires. Although violence and gruesome descriptions are less evident in Children of the Fox than in Paton Walsh's other works, inclusion of these realistic passages marks her attempt to bring to a young adult novel a mature, unsheltered awareness of the world. As with any historically accurate fiction, Children of the Fox affords an opportunity to reflect on attitudes that have changed with time, especially those regarding the place and role of women in society and the institution of slavery.

More summaries and resources for teaching or studying Children of the Fox.

Children of the Fox from Gale. ©2005-2006 Thomson Gale, a part of the Thomson Corporation. All rights reserved.