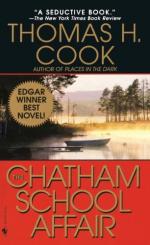 Thomas H. Cook
This Study Guide consists of approximately 22 pages of chapter summaries, quotes, character analysis, themes, and more - everything you need to sharpen your knowledge of The Chatham School Affair.

Thomas H. Cook was born on September 19th, 1947, in Fort Payne, Alabama. He received a bachelor's degree from Georgia State College, a master's degree from Columbia University, and then enjoyed a career as an English teacher and book review editor before becoming a full-time writer in 1981.

Today Cook writes his highly acclaimed mystery novels from his apartment in New York City and his house on Cape Cod.

Cook has had a passion for writing since childhood and claims to have begun his first novel when he was just eight years old.

He came from a home with no readers and no books, yet his urge to write never waned, but only grew stronger as he grew older.

Impassioned by family ties and the emotions and conflicts they ignite, Cook unravels mysteries that dig deep into the nature of relationships and the human condition.

More summaries and resources for teaching or studying The Chatham School Affair.

The Chatham School Affair from Gale. ©2005-2006 Thomson Gale, a part of the Thomson Corporation. All rights reserved.