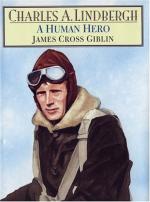 2. Lindbergh was the first instant celebrity. Recount the part radio, newspapers, and newsreels played in creating him as an American hero.

3. The Lindbergh kidnapping became front page news and turned Lindbergh against the press. How did the press corps report the news? Did they cross the boundary of sensitivity?

How did they report the "trial of the century"? What were the repercussions of the kidnaping case on federal law?

4. World War II was fought much differently than World War I. What part did aviation play in the two wars?

Was Lindbergh justified in thinking that German air power was much stronger than all the rest of Europe's combined?

5. Lindbergh visited the Tasaday tribe, which lived a stone-age life in a remote part...