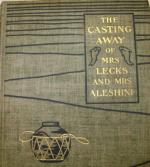 Overview
About the Author
Setting
Social Sensitivity
Literary Qualities
Themes and Characters
Topics for Discussion
Ideas for Reports and Papers
For Further Reference
Related Titles
Copyright Information
Order our The Casting Away of Mrs. Leeks and Mrs.Aleshine Short Guide

Frank R. Stockton
This Study Guide consists of approximately 10 pages of chapter summaries, quotes, character analysis, themes, and more - everything you need to sharpen your knowledge of The Casting Away of Mrs. Leeks and Mrs.Aleshine.

Francis Richard Stockton was born on April 5, 1834, in Philadelphia, Pennsylvania. A slight boy with a limp, he was a good student and won prizes in school for the quality of his writing. At age eighteen, he graduated from Philadelphia's Central High School and set out to learn the art of wood engraving. He first worked with his brother in Philadelphia, and later moved to New York, where he became involved with periodical publishing, a flourishing business during the second half of the nineteenth century.

He began his literary career by writing stories that he himself called imitations of adventure tales, such as Alexandre Dumas's The Three Musketeers (1844).

During the 1850s and 1860s, Stockton contributed children's stories to the Riverside Magazine for Young People, and worked as an assistant editor for Hearth and Home and in 1873 for St.

More summaries and resources for teaching or studying The Casting Away of Mrs. Leeks and Mrs.Aleshine.

The Casting Away of Mrs. Leeks and Mrs.Aleshine from Gale. ©2005-2006 Thomson Gale, a part of the Thomson Corporation. All rights reserved.