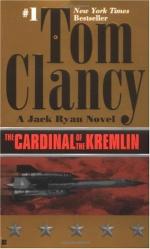 The Cardinal of the Kremlin Study Questions & Topics for Discussion

Tom Clancy
This Study Guide consists of approximately 8 pages of chapter summaries, quotes, character analysis, themes, and more - everything you need to sharpen your knowledge of The Cardinal of the Kremlin.

One of the distinguishing features of Clancy's thrillers is the depth of characterization. In The Cardinal of the Kremlin, he seems almost obsessive in his effort to explore what effect their actions would have on their characters. One effect of this is to make nearly every character sympathetic to some degree; another effect is a portrayal that makes Filitov memorable, a figure that may linger with readers long after the details of the plot have been forgotten. A successful discussion could be had by focusing on how characters are affected by their own deeds. Every action seems to have a fundamental moral implication that is reflected in the suffering, dismay, or confusion of an individual figure.

1. What motivates Col. Mikhail Semyonovich Filitov? Why is he so courageous in his spying for the United States?

Why is he also remorseful?

2. Compared to Filitov, Archer seems to have...

More summaries and resources for teaching or studying The Cardinal of the Kremlin.

The Cardinal of the Kremlin from Gale. ©2005-2006 Thomson Gale, a part of the Thomson Corporation. All rights reserved.