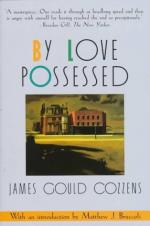 James Gould Cozzens
This Study Guide consists of approximately 10 pages of chapter summaries, quotes, character analysis, themes, and more - everything you need to sharpen your knowledge of By Love Possessed.

Almost before the book came off the presses, Cozzens sold the movie rights; estimates of how much he was paid range from $100,000 to $250,000. The film, a 1961 United Artists release, does not attempt to deal with the novel in all its depth. Instead, Cozzens's novel is reduced to the level of soap opera a la Peyton Place. Director John Sturges consciously chose to eliminate the introspective qualities of the novel, saying, "If you want that, read the book." This forgettable, superficial film stars Efrem Zimbalist, Jr. as Arthur Winner, Jason Robards as Julian Penrose, and Lana Turner as Marjorie.

More summaries and resources for teaching or studying By Love Possessed.

By Love Possessed from Gale. ©2005-2006 Thomson Gale, a part of the Thomson Corporation. All rights reserved.