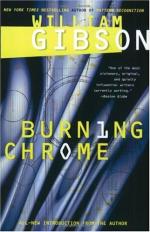 William Gibson
This Study Guide consists of approximately 16 pages of chapter summaries, quotes, character analysis, themes, and more - everything you need to sharpen your knowledge of Burning Chrome.

Nathaniel Hawthorne wrote "Artist of the Beautiful," "Rappaccini's Daughter," "The Birthmark," House of the Seven Gables.

One of Hawthorne's recurrent themes was the effect of technology on man. "The Birthmark" makes for an especially good comparison to Gibson, since Aylmer's drive to remove the hand-shaped birthmark from his wife's cheek is often read as a precursor to cosmetic surgery. Aylmer's incessant efforts are ultimately successful in removing the mark, but his wife dies as a result.

H. Bruce Franklin writes in Future Perfect that "Aylmer, who represents the Faustian, over-reaching, over-intellectualized, and overspiritualized aspect of science, sacrifices his nearly angelic but real wife Georgiana to the ideal of perfection."

The early concerns over daguerreotyping represented in The House of the Seven Gables are forerunners of Casey's discomfort over Lise's translation into a computer. Rubin points out to him that she's going to call him soon, because...

More summaries and resources for teaching or studying Burning Chrome.

Burning Chrome from Gale. ©2005-2006 Thomson Gale, a part of the Thomson Corporation. All rights reserved.