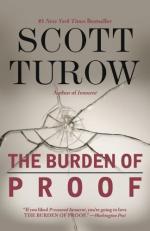 Writing Techniques in The Burden of Proof

Scott Turow
This Study Guide consists of approximately 7 pages of chapter summaries, quotes, character analysis, themes, and more - everything you need to sharpen your knowledge of The Burden of Proof.

Turow's plotting technique is basically the same as in Presumed Innocent. Although the novel seems to be written in retrospect (Stern's eventual marriage to Helen Dudak is presented in the book's first sentence), most of the action takes place in the present tense. While the book is written from the third, not the first, person point of view, the story is told exclusively from Stern's perspective.

Thus the reader, once again, must work side by side with the protagonist to decipher some of the book's mysteries.

As in Presumed Innocent, Turow also uses extensive flashback sequences to show the protagonist's relationship with the dead woman.

One intriguing symbol Turow employs in the novel is Stern's glass desk.

This desk, chosen by an interior decorator hired by Clara, had never been a favorite with him. Even after many years, he "was still not accustomed to looking down and seeing...

More summaries and resources for teaching or studying The Burden of Proof.

The Burden of Proof from Gale. ©2005-2006 Thomson Gale, a part of the Thomson Corporation. All rights reserved.