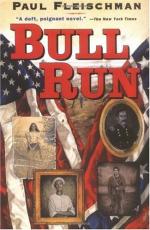 Fleischman is deeply interested in American history, and his books often include odd but meaningful details about past events. Bull Run is full of such details, from the game of baseball featuring a ball made of a walnut with yarn wrapped around it, to liquor buried in a watermelon; the first shows how carefree the soldiers at first were, and the second shows how undisciplined they were. Their devil-may-care attitudes and lack of discipline would cost many of them their lives in the Battle of Bull Run.

The novella exhibits Fleischman's mastery of style and his willingness to take chances with his writing. Bull Run is written in the first person from the points of view of sixteen characters.

Each chapter is told with the voice of a particular character; through these different voices, Fleischman shows the battle developing—and how different people, some from far-away places...