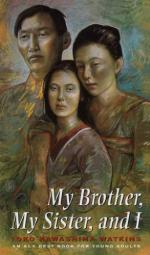 Overview
About the Author
Setting
Social Sensitivity
Literary Qualities
Themes and Characters
Topics for Discussion
Ideas for Reports and Papers
For Further Reference
Related Titles/Adaptations
Copyright Information
Order our My Brother, My Sister, and I Short Guide

My Brother, My Sister, and I Topics for Discussion

Yoko Kawashima Watkins
This Study Guide consists of approximately 17 pages of chapter summaries, quotes, character analysis, themes, and more - everything you need to sharpen your knowledge of My Brother, My Sister, and I.

1. When Yoko first sees her father at the train station, she does not recognize him. Why do you suppose that in a few short minutes she no longer sees him as the "a tired, worn old man," she saw when he arrived, but as "a strong, wise, kind father?"

2. Why do you suppose Junko Masuda accused the Kawashimas of arson, theft, and murder?

3. Why does Ko act angry when Yoko surprises her with touching kindnesses?

4. What do you think bothers Yoko more: the constant humiliation of her peers or the accusations of arson, theft, and murder?

6. What do the children's efforts to find their father say...

More summaries and resources for teaching or studying My Brother, My Sister, and I.

My Brother, My Sister, and I from Gale. ©2005-2006 Thomson Gale, a part of the Thomson Corporation. All rights reserved.