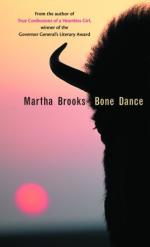 Martha Brooks
This Study Guide consists of approximately 19 pages of chapter summaries, quotes, character analysis, themes, and more - everything you need to sharpen your knowledge of Bone Dance.

Bone Dance's spirituality is unique among Brooks' works, but her sympathetic and sensitive portrayal of young adults is not.

Readers interested in the themes of grief and loss might enjoy the stories in Paradise Cafe and Other Stories. Similarly, the stories in Traveling On into the Light and Other Stories address moments of connection as powerful as those in Bone Dance. Her most recent novel, Being with Henry, depicts the relationship between Laker Wyatt, kicked out of his house for fighting with his stepfather, and Henry Olsen, an eighty-threeyear-old man who has trouble getting along with his own family. Once again Brooks deals with themes of trust, cross-generational relationships, and love.

Readers who enjoyed the treatment of nature in Bone Dance might enjoy Terri Windling's fantasy novel, The Wood Wife.

Poet Maggie Black moves to the American southwest, where she becomes caught up in...

More summaries and resources for teaching or studying Bone Dance.

Bone Dance from Gale. ©2005-2006 Thomson Gale, a part of the Thomson Corporation. All rights reserved.