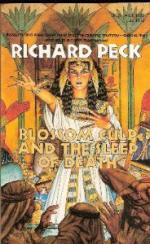 Richard Peck
This Study Guide consists of approximately 10 pages of chapter summaries, quotes, character analysis, themes, and more - everything you need to sharpen your knowledge of Blossom Culp and the Sleep of Death.

Richard Peck was born on April 5, 1934, in Decatur, Illinois. He attended schools in the United States and England, earning a bachelor's degree in English from DePauw University in 1956 and a master's degree in 1959 from Southern Illinois University. He received less formal training, although just as important, while traveling among foreign cultures and during his stint in Germany with the U.S. Army.

Before he turned to writing, Peck edited textbooks, poetry, and nonfiction anthologies for young adults, and taught school. He would have continued to teach had he not become discouraged with the educational system, the watered-down curriculum, and teaching itself that metamorphosed, as Peck says, into something resembling "psychiatric social work."

Instead, he decided to reach young adults through a different medium, the written word. His experiences in the classroom taught him to listen to young people and understand their concerns.

More summaries and resources for teaching or studying Blossom Culp and the Sleep of Death.

Blossom Culp and the Sleep of Death from Gale. ©2005-2006 Thomson Gale, a part of the Thomson Corporation. All rights reserved.