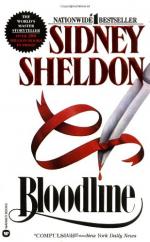 Sidney Sheldon
This Study Guide consists of approximately 7 pages of chapter summaries, quotes, character analysis, themes, and more - everything you need to sharpen your knowledge of Bloodline.

Roffe and Sons is a pharmaceutical corporation with laboratories and plants from Greenland to India. Its products include ethical drugs, available only through prescriptions, and propriety items, sold over the counter.

Since the days of its founder, the original Samuel Roffe, serums and later antibiotics have been specialties of the firm. It supplies drugs for the curing of rare diseases to the armed forces and to hospitals as a public service. Again, Sheldon has done his research thoroughly. Because they are in the forefront of the battle against diseases, he felt that pharmaceutical manufacturers were subjects that his readers would want to become more familiar with. He toured a number of plants. "They turned me down in one in New Jersey, but I visited the same pharmaceutical manufacturer in Switzerland."

Wealth and the power it possesses are common themes in Sheldon's books. Wealthy people...

More summaries and resources for teaching or studying Bloodline.

Bloodline from Gale. ©2005-2006 Thomson Gale, a part of the Thomson Corporation. All rights reserved.