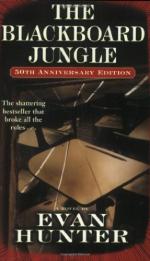 Evan Hunter
This Study Guide consists of approximately 8 pages of chapter summaries, quotes, character analysis, themes, and more - everything you need to sharpen your knowledge of The Blackboard Jungle.

The Blackboard Jungle was made into a successful movie which faithful adapted the original novel. Directed by Richard Brooks and starring Glenn Ford, Anne Francis, Louis Calhern and featuring an ensemble cast of newcomers as the students which included Sidney Poitier (who would later star in a British version of same sort of urban school drama, To Sir With Love), Vic Morrow, Richard Kiley, and Paul Mazursky (also later a director of urban movies). The film was released in 1955.

The prominence of the film did much to advance Hunter's career through publicizing the novel, and it marked the beginning of Hunter's independence as a writer.

More summaries and resources for teaching or studying The Blackboard Jungle.

The Blackboard Jungle from Gale. ©2005-2006 Thomson Gale, a part of the Thomson Corporation. All rights reserved.