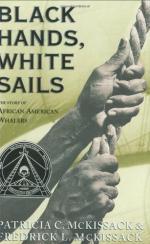 Patricia L'Ann Carwell was born on August 9, 1944 in Smyrna, Tennessee, to Robert and Erma Carwell, both civil servants.

At the age of three, Patricia moved to St.

She enjoyed taking control of the words and creating her own stories. Her grandfather, teachers, parents and friends influenced her creativity. She fondly remembers hanging a poem she wrote on her third grade bulletin board.

Black Hands, White Sails: The Story of African-American Whalers from Gale. ©2005-2006 Thomson Gale, a part of the Thomson Corporation. All rights reserved.