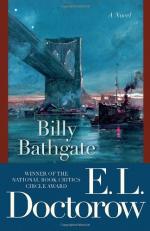 The best known literary precedent is no doubt Mark Twain's The Adventures of Huckleberry Finn (1884). Cited in a famous remark by Ernest Hemingway as a major source for "all American literature," Twain's classic account of a young boy who must reckon with the moral problems of an adult world is certainly an important model for Doctorow. Billy follows in the footsteps of Huck Finn as a young witness to scenes of wrongdoing, violence, and death. There is even a pastoral interlude when Billy must pose as a respectable boy who attends Sunday School in a small upstate New York town. His adventures in the tradition of Huck Finn typically mirror the deceit and hypocrisy of the adult community.