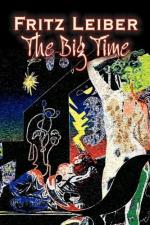 Literary Precedents for The Big Time

Fritz Leiber
This Study Guide consists of approximately 6 pages of chapter summaries, quotes, character analysis, themes, and more - everything you need to sharpen your knowledge of The Big Time.

Future war and time travel are two of the most common themes in science fiction, as is the idea of going back in time to change history. Isaac Asimov's The End of Eternity (1955) deals with a conflict somewhat similar to that of The Big Time, although without delving as deeply as Leiber's book does into the philosophic and moral consequences of such a conflict. Robert A. Heinlein's short stories "By His Bootstraps" (1941) and "All You Zombies — " (1959) play brilliantly with similar ideas, but again largely for the fun of the paradoxes involved.

More summaries and resources for teaching or studying The Big Time.

The Big Time from Gale. ©2005-2006 Thomson Gale, a part of the Thomson Corporation. All rights reserved.