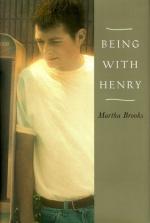 Being with Henry Topics for Discussion

Martha Brooks
This Study Guide consists of approximately 16 pages of chapter summaries, quotes, character analysis, themes, and more - everything you need to sharpen your knowledge of Being with Henry.

1. Being with Henry has been published in both the United States and Canada. The two editions have different covers. How are your impressions of the book's contents influenced by the differing cover art? Which do you prefer? Why? The Canadian cover can be found on the CM: Canadian Review of Materials website while the American cover can be viewed at sites such as Amazon.com.

2. The first section of Being with Henry is entitled "Dreams and Lies." What are the dreams and lies to which this title refers?

3. Assume the role of Laker, Audrey, or Rick, and using only the information found in the book's first segment, "Dreams and Lies," describe the other two characters. If you elect to do roleplay, try to adopt your character's body language as well.

4. Often when we read books, especially novels, we skip those pages of "stuff" at...

More summaries and resources for teaching or studying Being with Henry.

Being with Henry from Gale. ©2005-2006 Thomson Gale, a part of the Thomson Corporation. All rights reserved.