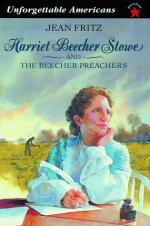 Jean Fritz
This Study Guide consists of approximately 16 pages of chapter summaries, quotes, character analysis, themes, and more - everything you need to sharpen your knowledge of Harriet Beecher Stowe and the Beecher Preachers.

1. Do some of your own research on Harriet Beecher Stowe and compare her to others who have fought for freedom and equality. What are some of the contributions and changes that they have made? Are their efforts still felt today?

3. What is the history of the character of Uncle Tom in Uncle Tom's Cabin? How is someone like him viewed today?

4. What were Stowe's views on giving women the right to vote? What may have been her influence on efforts to enfranchise women? Research the suffragists. Do you think it was especially hard for Stowe, being that she was black and a woman living during a time that viewed both as second class citizens?

More summaries and resources for teaching or studying Harriet Beecher Stowe and the Beecher Preachers.

Harriet Beecher Stowe and the Beecher Preachers from Gale. ©2005-2006 Thomson Gale, a part of the Thomson Corporation. All rights reserved.