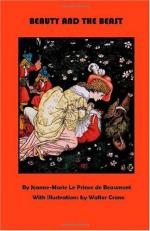 Robin McKinley
This Study Guide consists of approximately 9 pages of chapter summaries, quotes, character analysis, themes, and more - everything you need to sharpen your knowledge of Beauty.

After McKinley's first novel, Beauty: A Retelling of the Story of Beauty and the Beast, she wrote a collection of short stories called The Door in the Hedge. Two of the stories are original, and two are retellings of fairy tales. The Blue Sword is a fantasy novel set in an imaginary country called Damar. It was followed by another fantasy, The Hero and the Crown, which features a female protagonist. McKinley edited a collection of fantasy stories called Imaginary Lands, which includes one tale of her own called "The Stone Fey." All of these works reflect the influence of folk and fairy tales on the author's imagination. Sequels to The Blue Sword and The Hero and the Crown are anticipated.

More summaries and resources for teaching or studying Beauty.

Beauty from Gale. ©2005-2006 Thomson Gale, a part of the Thomson Corporation. All rights reserved.