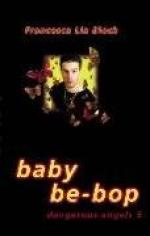 Francesca Lia Block
This Study Guide consists of approximately 22 pages of chapter summaries, quotes, character analysis, themes, and more - everything you need to sharpen your knowledge of Baby Be-Bop.

1. Locate and explain the cultural references which characters mention in the book.

Explain how you would show the magical elements.

3. When Dirk hears his family's stories, he learns of their importance in his life.

Write about a family story that helps to explain who you are.

5. Collecting significant stories (from his family and from the larger culture) lets Dirk know he is not alone. List your most significant stories—from television, movies, family experiences, books, or public events. Write about why these stories have remained in your memory...

More summaries and resources for teaching or studying Baby Be-Bop.

Baby Be-Bop from Gale. ©2005-2006 Thomson Gale, a part of the Thomson Corporation. All rights reserved.