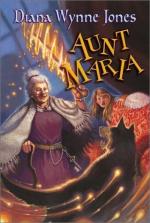 Diana Wynne Jones
This Study Guide consists of approximately 11 pages of chapter summaries, quotes, character analysis, themes, and more - everything you need to sharpen your knowledge of Aunt Maria.

Aunt Maria's overlapping themes of the use of power, family tension, selfrealization, the male-female relationship—typical of Jones—can be found in several outstanding novels. The awardwinning Charmed Life and its sequel Witch Week concern the right use of power. In both, Chrestomanci is a government employee who keeps magic from being used for evil purposes.

In it, young Sophie, magically transformed into a bossy old housekeeper, battles the wizard Howl against a backdrop of humor.

More summaries and resources for teaching or studying Aunt Maria.

Aunt Maria from Gale. ©2005-2006 Thomson Gale, a part of the Thomson Corporation. All rights reserved.