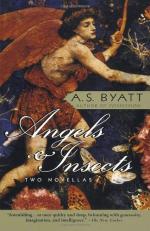 A. S. Byatt
This Study Guide consists of approximately 7 pages of chapter summaries, quotes, character analysis, themes, and more - everything you need to sharpen your knowledge of Angels & Insects.

Byatt, who had previously used the fiction forms of the novel and the short story, here shows considerable skill with the third form, the novella. She relates the two novellas to each other by setting and social concerns, but each is capable of standing on its own.

Readers who find some of her novels difficult because of their length or density will find these shorter works more accessible.

As she does in many of her other works, works-within-works appear in each novella. In "Morpho Eugenia," Matty Crompton's short story "Things Are Not What They Seem" is included in its entirety along with parts of nonfiction works by William and his father-in-law. In "The Conjugial Angel," Byatt includes illustrations by Victorian artists and quotations from Victorian poems; even her spirits speak in poetry during the seances.

More summaries and resources for teaching or studying Angels & Insects.

Angels & Insects from Gale. ©2005-2006 Thomson Gale, a part of the Thomson Corporation. All rights reserved.