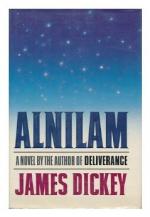 The peculiar physical design of Alnilam, its organization into columns of dark and light type, recalls Dickey's tendency in his early poetry to divide his lines into distinct halves. As in much of the rest of his writing, Dickey is attentive here to the accents and idioms of his characters, in this case for the most part the language of rural North Carolina. In Alnilam, he continues his connoisseurship of the monomaniacal individual tested under extraordinary circumstances. Violence is again an important feature of the Dickey universe, especially in the scenes in which Zack kills five ferocious canines, is himself decapitated by a airplane propeller, and Cahill crushes Lieutenant Foy's hand.