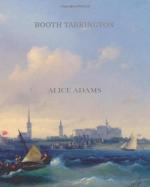 Excerpts from Alice Adams were anthologized, and the book was translated into several foreign languages. It was twice made into a movie. The first film was made in the 1920s and starred Florence Vidor. Katherine Hepburn played Alice in the second movie made by RKO in 1935. Fred MacMurray was Arthur Russell; Fred Stone was Mr. Adams; Frank Albertson played Walter; and Anne Shoemaker played Mrs. Adams. Tarkington wrote a number of screenplays in the course of his career, but never adapted any of his major books for the movies.