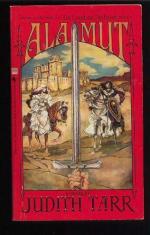 Judith Tarr
This Study Guide consists of approximately 9 pages of chapter summaries, quotes, character analysis, themes, and more - everything you need to sharpen your knowledge of Alamut.

As an adult quest novel, Alamut is reminiscent of some of the tales and deeds of King Arthur's knights. The setting draws as much on the magic of the Arabian Nights as on the solid historical works cited in the Author's Note.

Tarr credits Andre Norton as a formative influence on her work. Faint traces of motifs from Norton's Witch World are visible here, such as Morgiana's greater magic. However, there is no totally comparable work in modern fantasy. The sophistication of Tarr's characters and the positive treatment of female sexuality are almost unique in the genre.

More summaries and resources for teaching or studying Alamut.

Alamut from Gale. ©2005-2006 Thomson Gale, a part of the Thomson Corporation. All rights reserved.