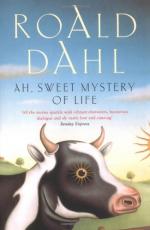 Roald Dahl
This Study Guide consists of approximately 13 pages of chapter summaries, quotes, character analysis, themes, and more - everything you need to sharpen your knowledge of Ah, Sweet Mystery of Life.

Like the character Boggis, Dahl maintained interests in collecting and repeatedly used his knowledge to craft his stories.

Other art collectors appear in "Nunc Dimittis" and "Neck." An unusual collector of butterflies is pivotal in "My Lady Love, My Dove" and a nouveau-riche collector appears in "Taste."

Risk-takers and gamblers also reappear in Dahl's oeuvre. "Taste" is based on a gamble between an up-and-coming young man and a stockbroker, who wages his daughter's hand. Other characters are willing to risk their lives or body parts, such as "Dip in the Pool" and "Man from the South."

Such deceits for personal gain are satirized by Dahl and infrequently appear without a touch of irony.

After writing very little during the 1960s and early 1970s Dahl hoped to return to writing adult fiction. He recycled much of his earlier work from the short story "The Champion of the...

More summaries and resources for teaching or studying Ah, Sweet Mystery of Life: The Country Stories of Roald Dahl.

Ah, Sweet Mystery of Life: The Country Stories of Roald Dahl from Gale. ©2005-2006 Thomson Gale, a part of the Thomson Corporation. All rights reserved.