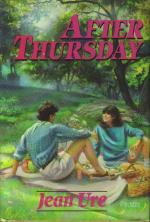 After Thursday Summary & Study Guide includes comprehensive information and analysis to help you understand the book. This study guide contains the following sections:

Preview of After Thursday Summary:

After Thursday opens with the protagonist Marianne Fenton reluctantly trying to help her mother decide how to use the things they have moved with them to decorate their new apartment.

Marianne has little concern for how things look, including herself, so she is not interested in her mother's decorating efforts for the apartment nor herself.

As the plot develops, seventeenyear-old Marianne struggles to discover the reasons for her love of Abe, a twenty-five year-old, blind music teacher. Marianne and others her age and older meet in the apartment Abe shares with Donald, a fellow musician, on Thursdays to perform madrigals.

She has taken on a custodial role with Abe, shielding him from activities she thinks will be an embarrassment to him because of his blindness. She allows her involvement with Abe to keep her from doing things she would like to do, such as playing net ball on...