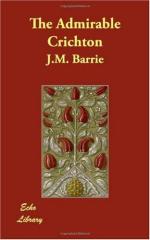 J. M. Barrie
This Study Guide consists of approximately 12 pages of chapter summaries, quotes, character analysis, themes, and more - everything you need to sharpen your knowledge of The Admirable Crichton.

Preview of The Admirable Crichton Summary:

The characters in The Admirable Crichton fall into two categories: masters and servants. The characters belong to different categories on the Pacific island than they do in London.

Crichton, the main character, is a man in his early thirties. A dignified, respectful butler as the play opens, he is satisfied with his status and performs his duties with distinction. He does not think of himself as the social equal to Lord Loam any more than he would think of the kitchen servants as his equals. In his mind, they have their jobs and he has his. He detests the "democratic gatherings" insisted upon by his master, Lord Loam, because they perpetuate what he considers the falsehood that human beings are, or can be, equal. He participates only because his master orders him to.

When the travelers find themselves on the deserted island, however, it...

More summaries and resources for teaching or studying The Admirable Crichton.

The Admirable Crichton from Gale. ©2005-2006 Thomson Gale, a part of the Thomson Corporation. All rights reserved.